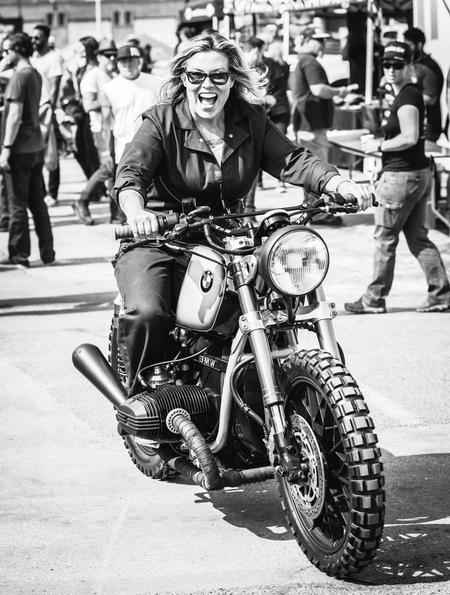 Often at Vintage Races and Rallies across the United States, Jacqui Van Ham has been a constant presence in the motorcycle community since the 2000's. Her passion for the industry soon led to the opportunity to contribute to several publications. With a unique blend of knowledge and charisma, she quickly became a voice in a community that had few younger female members, but was growing.

After contributing to BMW ON, Moto Revue Classic, BMW MO, Motorcycle Classics, and Cafe Racer magazine, she hatched a plan to discover the vintage motorcycle and motorcycle racing culture in Europe and publish detailed articles about the fantastic and diverse communities there. The pinnacle of these reports was a feature and cover photo in Classic Bike, one of the few American women to ever be asked to do so.  While continuing with freelance moto-journalism, she started working within the motorcycle industry as a Brand/Product Specialist and Announcer. This was a bold move into the Trade Show arena, where there had been very few women working professionally.

Representing products quickly led to offers to represent Companies, too- as well as effectively communicate their Marketing message, deliver increased data leads, answer consumer questions and be a face for those brands. Being in the event space uses not just talent muscles; Jacqui offers a sharp eye for detail, has constructive ideas to improve events, is great at logistics/travel and has a wide network of trouble-shooters, creatives, influencers and innovators.

--Featured Rider, “Women in Motorcycling” 2016 Summer Italy Tour, sponsored by EICMA (largest motorcycle trade show in the World) and the Italian Board of Tourism.